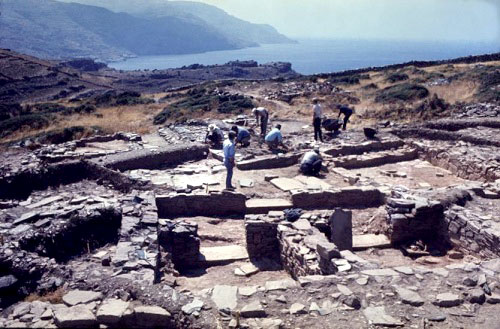 Zagora is one of the best preserved cities of the geometric period in Greece (900 – 750 BC.). The ancient settlement of Zagora is located on a steep plateau (160 m high) in the homonymous peninsula. Excavations that have taken place since 1960 have revealed remarkable findings. The life of the settlement began in the 10th century BC. And lasted until the end of the 8th century BC. The settlement was protected by a strong wall, 110 m long and 2 to 4.80 m thick, with a height of 3 m. Inside the settlement there is a sanctuary, which was first established in the 8th century BC. and continued to operate until the classical times, although the settlement was abandoned three centuries earlier. The houses were made of slate and covered with a gravel roof. The Archaeological Museum of Chora exhibits the findings of the excavation as well as representations of a house and temple.

Where it is:
At the homonymous plateau, on the west side of the island.
How to get there:
Walk by foot, following the trail from “Agia Triada”, shortly after Stavropeda, towards Korthi. You arrive after a 40-minute hike. There are signs on the path and the route is very interesting.